On December 22, 1986, SueZann Bosler and her father, Rev. Billy Bosler, were attacked in the church parsonage by an intruder. Rev. Bosler was stabbed 24 times. SueZann, in an effort to help him, was herself stabbed in the back and head and left for dead. While lying on the floor pretending to be dead, she heard the intruder ransack the house as she watched her father take his last breath.
As a Brethren minister, Rev. Bosler had been an opponent of capital punishment, and had once told SueZann that if he was ever murdered he would not want his killer to receive the death penalty.

On her father's behalf, SueZann worked for 10 1/2 years to spare the life of his murderer, James Bernard Campbell. She voiced her opposition to the death penalty throughout three trials and two sentencings. Her efforts put her at stark odds with Florida prosecutors and judges, who at one point threatened her with contempt of court if she revealed her views to the jury considering Campbell's fate. 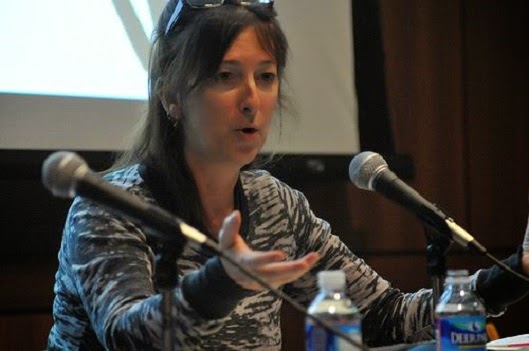 "Being able to point to him and express my forgiveness, was like having a weight lifted from my shoulders," she recalls.

SueZann devoted many years to seeking commutation of Campbell's death sentence. On June 13, 1996, her efforts were successful and his sentence was commuted to three consecutive life terms.
I met SueZann when we were guests on the Oprah Winfrey Show.  It was a segment called “Forgiving the Unforgivable.  We were in the second set and when it opened I was between Oprah and SueZann.  Oprah introduced us to the audience and SueZann told her story.  I was amazed as she told it, it was extremely powerful.   When it was time for me to tell my story, I almost forgot that I had one.

After the program my cousin Judi and I were able to have lunch with SueZann and do a little shopping   before she flew back to Florida.
We were reunited on the 1993 Indiana Journey of Hope through the efforts of Bob Gross who organized that inaugural Journey.   That is also where she met Marietta Jaeger.  In 1994 Marietta’s, SueZann’s and my story were the focus for the Discovery Channel’s documentary "From Fury to Forgiveness" narrated by Susan Sarandon.  In 1997 SueZann, Marietta, George White and Sam Reese Sheppard joined me in the founding of Journey of Hope...from Violence to Healing as a nonprofit organization. 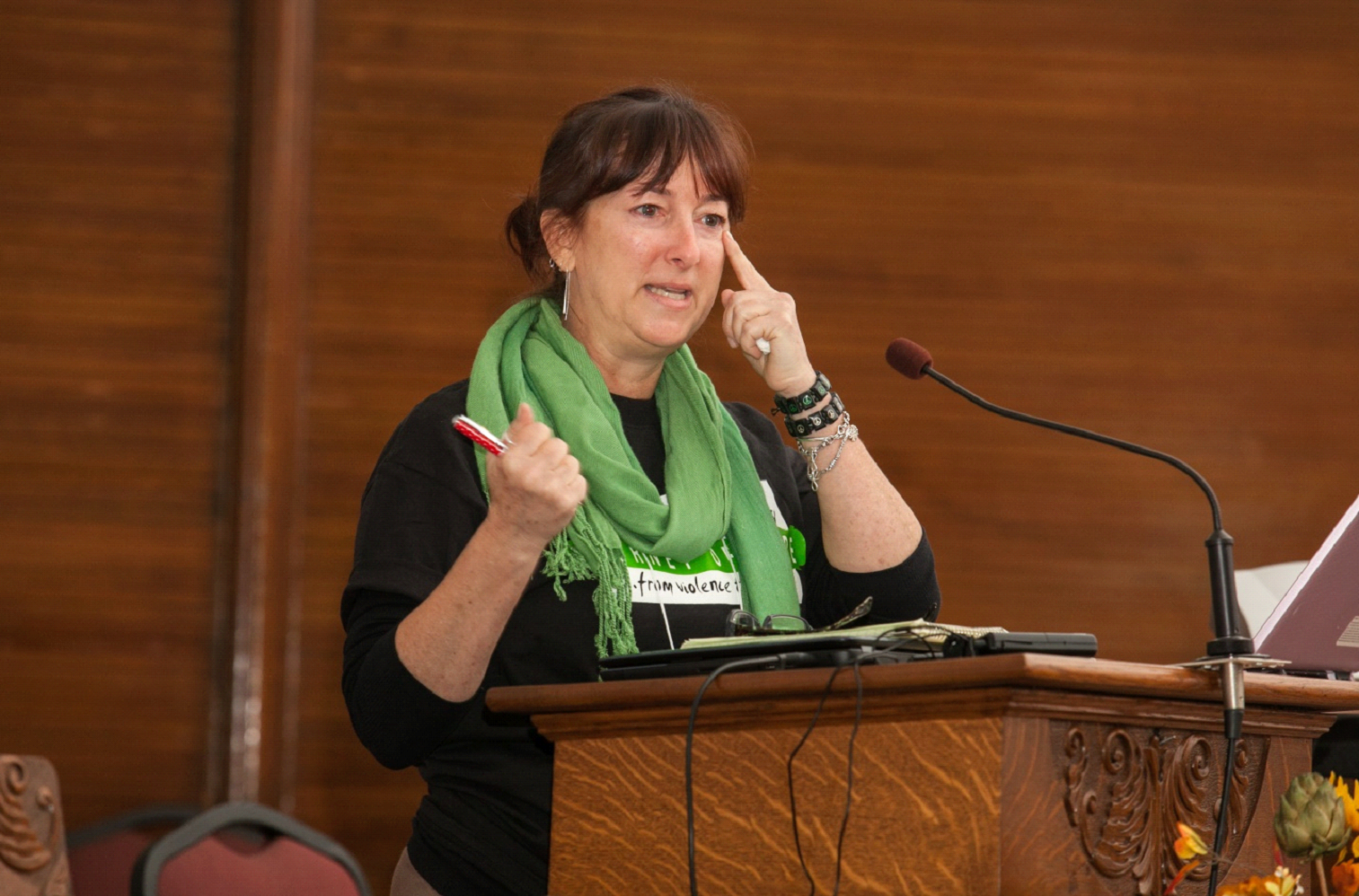 Not only is SueZann Bosler a Cofounder of the Journey of Hope, but after a short hiatus SueZann returned to the Board of Directors several years ago.  SueZann has traveled internationally on behalf of the Journey and is often a guest speaker for the Church of the Brethren's program "On Earth Peace”.

The First United Methodist Church Foundation of Anchorage, Alaska awarded the Journey of Hope…from Violence to Healing $2,500 for the 2014 African Journey of Hope.  In 2013 the FUMC Foundation gave $1,000 for the Journey’s World Day Against the Death Penalty Tour in Indiana.  The Pastor of FUMC, Reverend Ronald Myers is a great personal support, for me and for the vision of the Journey’s mission.  He, along with other members of First United Methodist Church, knows the power of the Journey’s message of love and compassion for all of humanity.
Upon hearing the news of the award I told Pastor Ron about SueZann.  He has met different people from the Journey but not her.  I told him SueZann’s story.  Ron has two young daughters not far from SueZann’s age at the time her father, a fellow minister, was murdered. I know he was touched by her story.  I told him SueZann wanted to go to Africa and that the award would go for her travel to Kenya and Uganda.

He was touched, and pleased.
SueZann was, and remains elated.
SueZann is the first, of what we hope to be 8 more, to be able to join Curtis, Randy, Babu Bill and yours truly for the Africa Team of 13.  George White and I have always called her Little Sister.  It has stuck and she will always be our Little Sister.  Not sure if she will go along with the Papa Bill tag or not.  It might just stay at big brother.

I asked SueZann about her thoughts on going to Africa.
She told me she has been interested in going to Africa, ever since meeting Edward Mpagi and Ronald Katongole on the Indiana Journey of Hope last year.  She told me that she had secretly wished that at some point in time she could go to Uganda and be involved in helping in any way she could.  She loves the incredible work they are doing.  She also recently reviewed some video of our visit to Edwards’s school in 2011 that is provided by Kathy Chism’s Dream One World.   http://dreamoneworld.org/  Kathy started the Uganda School Project and helped Edward build his school.

“The images of those beautiful smiling faces I saw on the video was the final straw.”
“At first I was excited in sharing what I have experienced; my story, a message of forgiveness and my convictions in which have been strengthened by working with other “victim survivors” in addition to what I have learned about life, humanity, compassion and forgiveness. I quickly realized that I would not be just sharing/educating the Ugandans they will be sharing/teaching me about life, humanity, compassion and forgiveness.”

“I not only wantto be there to reunite with old friends/colleagues I am eager to meet new allies. I personally want to be there to expand my inner passion of restoring humanity to those not only on death row, but victims (families & friends) on both sides. To merge worldwide organizations working together (strength sometimes comes in numbers), share our resources, to move toward something we all have in common, Our Universal Goal, to abolish the death penalty, violence, brutality and torture. We are coming closer to renewing life and hope, to those whose souls are being damaged, belief system broken-down, and hope trampled upon, and life taken with a stroke of a pen.”

“I will be taking home a heart full of unconditional love, promise and compassion, with help of the humble spirits of Uganda, who will rejuvenate my faith in humankind.”

“I already want to thank them for giving us the chance to be involved and empowered with Be the Change and Dream One World , we are truly blessed in assisting this to come true. “
“I am so honored that the First United Methodist Church Foundation of Anchorage has awarded this Africa grant to the Journey of Hope…from Violence to Healing to help sow the seeds of love and compassion for all of humanity.”

As I stated once before, a friend asked me to write how the African team of 13 came to be.  I think this is one that needs no further explanation although there are many more reasons I could give. 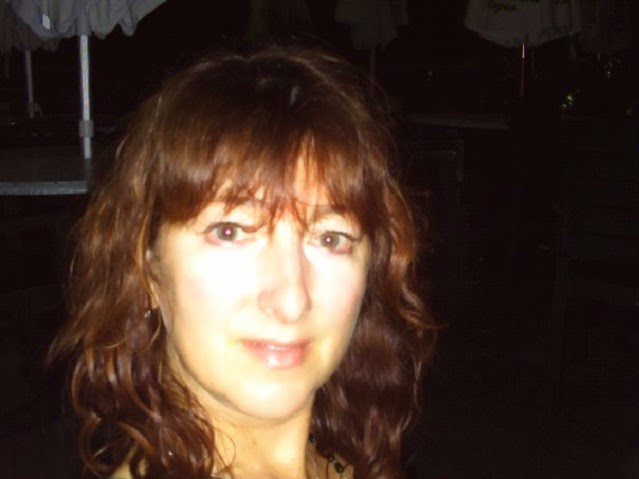 SueZann is a hairdresser.  If you live in the Fort Lauderdale area contact her through Facebook if you need a do
SueZann is the fifth member of the team to be introduced.  Terri Steinberg is next.  Then we will be half way there.
Please feel free to share this blog with others or make a comment in the provided box. 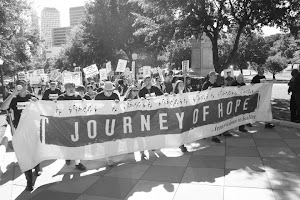 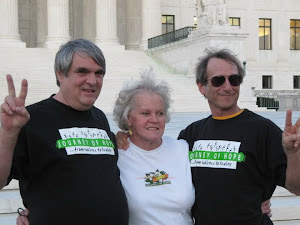 Bill Pelke, Anchorage AK -- Bill authored a book entitled Journey of Hope...From Violence to Healing, which details the May 14, 1985 murder of his grandmother Ruth Elizabeth Pelke, a Bible teacher, by four teenage girls. Paula Cooper who was deemed to be the ringleader was sentenced to die in the electric chair by the state of Indiana. She was fifteen-years-old at the time of the murder. Pelke originally support the sentence of death for Cooper, but went through a spiritual transformation in 1986 after praying for love and compassion for Paula Cooper and her family. He became successfully involved in an international crusade on Paula's behalf and in 1989 her sentenced was commuted to sixty years in prison. Over 2 million people from Europe, mostly Italy, signed petitions that Paula be removed from death row. Pope John Paul II’s request for mercy, Paula was taken off of death row and her sentence commuted to sixty years. Bill, a retired steelworker, has dedicated his life to working for abolition of the death penalty. He shares his story of forgiveness and compassion and the healing power of forgiveness. Pelke has traveled to over forty states and ten countries with the Journey of Hope and has told his story thousands of timesFactsPresident and Co-founder of Journey of Hope...From Violence to Healing; Chair - PresentBoard Member Journey of Hope…from Violence to Healing; 1997-PresentBoard: National Coalition to Abolish the Death Penalty; 1996-Present Chair 2004-08 Founding Board Member of Murder Victims Families for Human Rights 2004Board Member MVFHR; 2004-PresentIncorporator of Murder Victims Families for Reconciliation;1993Board Member MVFR; 1991-1998Board Member; Alaskans Against the Death Penalty Cofounder Abolitionist Action Committee; 1993 Author: Journey of Hope…from Violence to HealingLinks to Bill's JourneyThe Hard Road to Forgiveness - Yes Magazine - Mary Sue PennMoving Towards Abolition - The Witness Some murder victims' kin reject capital punishment; others endorse the sanction - Richmond Times-DispatchIn Memory of James V. Allridge III Bill Pelke's portrait at "Our friends in prison"The Optimism Club - Bill Pelke "Forgiveness vs revenge"Interview with Swiss organization "Lifespark"the greatest part of God’s love is the forgiveness that 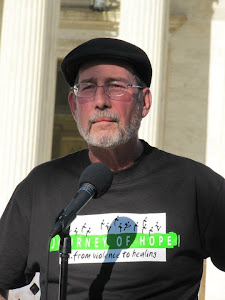 George White, ALOn February 27, 1985 in Enterprise, Alabama, George was living his little piece of the American Dream. Husband of Charlene and father of Tom and Christie, he was a successful, business-degreed executive, Sunday school teacher, little league coach and PTA president -- a yuppie in southeast Alabama. That evening everything changed.When George, vice-president of Townsend Building Supply, Inc., and his wife, Char, stopped at his store after business hours, they thought they were doing a favor for a man who urgently needed an item for an emergency home repair. Instead, they experienced firsthand the insanity and horror of murder. A masked gunman entered the building and shot the pair repeatedly during an armed robbery. George suffered gunshot wounds to his left arm, thigh and abdomen during a struggle with the gunman. Following emergency surgery, George survived. His wife was not so lucky. Char was pronounced dead at the hospital after sustaining two gunshot wounds to the head. Tom and Christie were only twelve and five at the time of their mother's death. The nightmare had only just begun.Sixteen months later George was charged with the murder of his wife. The State sought the death penalty, and, following a trial that was later characterized as a mockery and a sham, George was convicted and sentenced to life in prison. Incarcerated for a total of two years, one hundred and three days, the conviction was overturned in 1989. George remained in legal limbo for nearly three more years. On April 10, 1992, the prosecution asked that the charge be forevermore dismissed when the proof of George's innocence finally surfaced. The trial court so ruled. The ordeal had lasted for more than seven years.As a survivor of a violent crime, husband of a murder victim, suspect, accused, indigent defendant, convicted murderer, and innocent man exonerated, George understands fully how easy it would be to advocate revenge. However, as a family the Whites reject the death penalty as a solution to heal the wounds of their loss. George says, "I believe that society's laws must offer relief for a victim's anger and loss, and we must be afforded protection from those who would harm us; however, one cannot stop the shedding of blood by causing more blood to be shed. No amount of killing would restore Char to my family or take away the pain of losing her. What began with a horrible act ofviolence should not be memorialized with an act of vengeance." By Abe BonowitzFactsJourney of Hope Cofounder Journey of Hope Board Member 1997-2003; 2006-Journey Ambassador MVFR Board Member 1994-1998

Journey of Hope... from Violence to Healing Texas Tour 2010 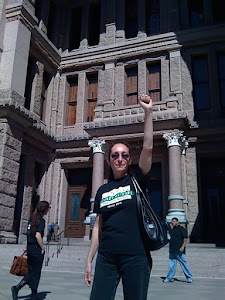